CONGRATULATIONS TO THE 2020 MAN AND WOMAN OF THE YEAR!

After weeks of competition amongst 13 incredible community leaders, candidates collectively raised over $280,000 in support of Canadians affected by blood cancers.

We would like to thank all candidates for their steadfast commitment to improving outcomes of individuals and families affected by blood cancers in participating during this particularly challenging year. 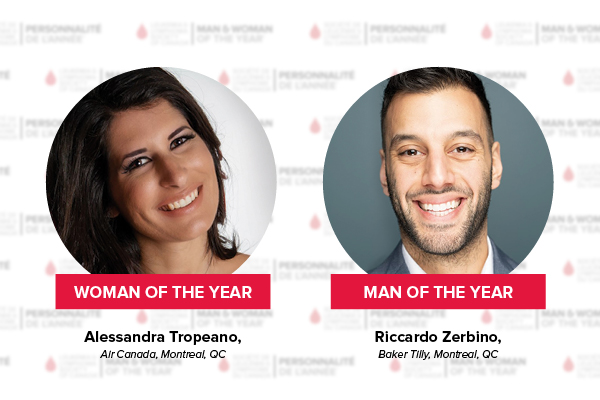 Man & Woman of the Year is a philanthropic competition to support blood cancer research among a group of motivated and dedicated individuals in communities across the United States, and 2020 marked the second edition of the campaign in Canada. Candidates formed powerful fundraising teams and compete in honour of local blood cancer survivors.

The man and woman who have raised the most funds during the nine-week campaign were awarded the prestigious title of Man or Woman of the Year in their community.

The man and woman who have raised the most across the Canada will be recognized as the National Man & Woman of the year.

Would you, or someone you know, like to participate in the 2021 edition? Nominate a candidate today!

Are you the next Man or Woman of the Year?

Man & Woman of the Year is a network of individuals driven to find cures for cancer. Finding cures for cancer takes us all, and we need your help. If this is the campaign for you, consider nominating yourself or nominating someone you know to become a candidate.

The campaign runs between February and June. Check your local region for specific dates.

Donating to a Man & Woman of the year participant is easy! Just search for the name of the participant and then click on their page to make a donation!