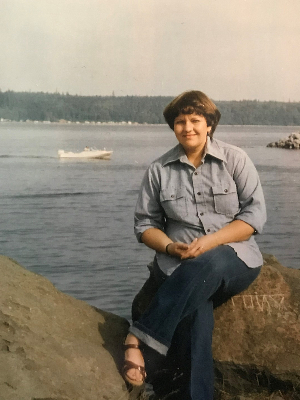 Light The Night brings communities across Canada together for one magical evening to share stories, remember loved ones lost and pay tribute to our heroes, bringing light, love and hope to dispel the darkness of blood cancers.

I am taking the first step and showing my support.

I know first hand the devastating effect Blood Cancer can have on one's family. Our team has participated in Light the Night since 2014. During this time we have raised over $42,000. We could not have done this without the tremendous financial support of our family and friends. We appreciate it! THANK YOU!

I am honoured that this year, "Manitoba's Remembered Honoured Hero" is my sister Linda. Please take the time to read the following synopsis of her story. Thanking you in advance for your anticipated support.

Linda was an optimistic soul, always preferring to look on the bright side and not wasting any time worrying about things over which she had no control. Linda was a woman of strong faith, which saw her through many challenges, including her last one. Linda died on May 17, 2013 at the age of 60, 3 weeks after being diagnosed with a rare, aggressive T-Cell lymphoma. We are team LINDA’S HOPE.

We walk in her memory with the HOPE that one day a cure will be found for lymphoma and all blood cancers.

Linda was born on July 25, 1952 to Evelyn and Peter Giesbrecht. She was the second in a family of eight children. She spent the first eighteen years on the family farm near Plum Coulee in Southern Manitoba. Linda attended a one room country school for grades 1 to 8 and then high school in Altona. She was the first in her family to attend university and she financed her studies by working summer jobs. Linda graduated with a Law degree from the University of Manitoba in May, 1976. She articled in the Crown Prosecutors office in Dauphin until her Call to the Bar in June, 1977. She began her career as a Crown Attorney in Winnipeg and then in Dauphin till 1981. Following 15 months of travel overseas, Linda returned to Prosecutions in Portage la Prairie in 1982, where she worked until 1988 when she was appointed to the Provincial Court. Linda was one of 3 women appointed that year. In 1988 there were no women on the Provincial Court. Their appointment marked a historic change in that they were trailblazers for the future of the Court. Since then, the Court has never been without women and in fact in 2013 was 50% women.  Linda considered it a privilege to be a Judge and serve in this important role that represents for many people, the face of the justice system. When Linda was sworn in, she said in her formal remarks that she aspired to live up to the task of judging as described by the philosopher Socrates. He said “four things belong to a Judge:

Linda’s colleagues recognized her as having lived up to these goals. Linda was respected for her work ethic, common sense approach, humanity and understanding. Her decisions were well researched and on more than one occasion decisions made by Linda were upheld by the Supreme Court of Canada.

Linda’s experiences having grown up on a busy farm no doubt made her the very thorough and hard worker she was. Linda described her two grandmothers as her inspiration. Both were born in the first decade of the 20th century and did not have access to much formal education or the opportunities available to women today. Her grandmothers were very strong women, who faced great challenges, yet they clearly demonstrated what could be achieved through hard work and dedication.

Linda’s retirement in 2010 was widely viewed as a real loss to the Provincial Court both within and outside the province. Retirement afforded Linda more time to spend with family and opportunity to pursue her interests. She loved the family cottage at Pelican Lake; she enjoyed playing guitar and leading the campfire songs. Linda would relax there, book in hand, looking out at the Lake and often be heard to say – “This is the Life.” She travelled extensively throughout Canada, the United States and Mexico. The 15 month hiatus to travel mentioned earlier was with her sister and it took them backpacking throughout Europe, Israel, Egypt, Indonesia, Singapore and Australia. Linda had a keen sense of humor; she was always looking for a good joke, saying that laughter is always good medicine. She loved photography, especially with her nieces and nephews as her subjects. Linda loved reading and music. She dabbled in and created some lovely stained-glass pieces.

She made the most of her retirement, packing a lot into the 3 years she was granted.

In February, 2013, Linda was plagued by a very painful shoulder, initially diagnosed as a rotator cuff injury. As well, she had been fighting an ongoing cold and fatigue. On April 24th she was seen at Health Sciences Centre Emergency as overnight she had retained excessive fluid and was short of breath. She was admitted to HSC and various diagnostic tests were performed. The next day she was diagnosed with a rare, aggressive T-Cell lymphoma which doctors told her was terminal. Despite the grim diagnosis, Linda was willing to and underwent experimental treatments which did not lead to a positive result. She was never able to leave the hospital. Her strong Christian faith sustained her and as she said on more than one occasion “Miracles do happen…” For the next 3 weeks she was an example to family and friends of not only how to live, but also how to die. Despite tremendous pain Linda maintained her sense of humor and her optimism, taking on the challenge of trying to make everyone around her feel better. She was comforting us while facing the end of her life. Although for her, the miracle of recovery was not to be, Linda maintained that being able to say goodbye to those she loved was her miracle.

Linda was our Rock and our Inspiration. She is missed every day, but has left us with warm and rich memories to cherish. As team LINDA’S HOPE, we join the Light the Night walk with the HOPE that one day Cancer will be defeated and no one will have to suffer through a fight with cancer or a loss of a family member or a friend.

Linda's Hope
Donate to Wendy
Wendy is participating in Light The Night Winnipeg on October 23 to fight blood cancers.

Now in 2021, COVID-19 continues to significantly impact people affected by a blood cancer. Never has our community needed us more. Never has the challenge been greater.

Never has it been more important to take back the light that cancer and COVID -19 have tried to take away! Let's make a difference. Join me at Light The Night, or make a donation today to show your support.

Registered
First Donation
Strava Connected
Almost There!
You did it!

You’ve earned a mini celebration kit, including our iconic lantern

You have earned an invitation to an exclusive LLSC blood cancer research event, and much more!

Get ready to attend a virtual research lab tour, plus so much more!

You can personalize a thank you message along with your team photo directly to healthcare professionals during one of our training sessions.