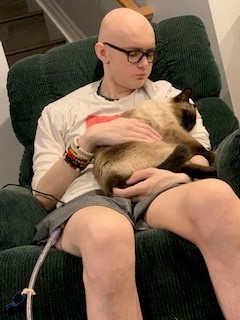 Brian Patrick Fraser was born in 1994, to Sheila and Rick Fraser and was soon joined by two younger brothers, Tait and Ian. He enjoyed a happy, healthy and uneventful childhood in Brockville Ontario, then headed to Ottawa to study Radio Broadcasting. He immediately found a job at CFRA, and was enjoying life in the city and working as the technical producer for Bill Carroll’s show, The Morning Rush. Brian had a keen interest in all sports, and his passionate devotion to many teams, but above all, The Ottawa Senators, led to an online presence that he greatly enjoyed.

In May of 2019 Brian was diagnosed with Chronic Myeloid Leukemia . He began treatment, and although this cancer came with a good chance of a very positive outcome, Brian didn’t return to good health. The following spring in the earliest days of the Covid Pandemic Brian was found to have Acute Lymphocytic Leukemia. While undergoing aggressive treatment, in complete isolation, for this much more serious cancer, Brian made good use of his social media and Bell Media connections. Following his interview with Lisa LaFlamme on national TV, encouraging blood donations during the pandemic, the Canadian Blood Services Website crashed, due to the volume of calls.

Brian’s brother Tait was a 100% match and a bone marrow transfer was performed in June. Brian was able to return home to Brockville for most of the summer, but all was not well. December brought a very grim prognosis. Facing another Covid Lockdown Brian chose to have end of life care at home, so he could be with his family. He continued to raise awareness about Leukemia and Canadian Blood Services. Brian’s death on February 25, 2021 was widely reported by the Media colleagues he loved. Tributes poured in from politicians, athletes and public figures. His Beloved Sens wore decals on their helmets and had a moment of silence to honour him. Their next fifty/ fifty draw raised a record amount for Canadian Blood Services. Five months after his death, the financial donations in Brian’s memory surpassed $94,000 and more than 150 friends and strangers have rolled up their sleeves to donate. Both numbers continue to climb.

Brian so wanted to ring the bell and say, “I beat cancer!” At 26 he wanted to accomplish so much more. With the courage, dignity and positive attitude he displayed, and the legacy he has left to benefit others, there is no denying Brian’s victory. He is without a doubt a fighter and a true hero.

Now in 2021, COVID-19 continues to significantly impact people affected by a blood cancer. Never has our community needed us more. Never has the challenge been greater.

Never has it been more important to take back the light that cancer and COVID -19 have tried to take away! Let's make a difference. Join me at Light The Night, or make a donation today to show your support.

Registered
First Donation
Strava Connected
Almost There!
You did it!

You’ve earned a mini celebration kit, including our iconic lantern

You have earned an invitation to an exclusive LLSC blood cancer research event, and much more!

Get ready to attend a virtual research lab tour, plus so much more!

You can personalize a thank you message along with your team photo directly to healthcare professionals during one of our training sessions.