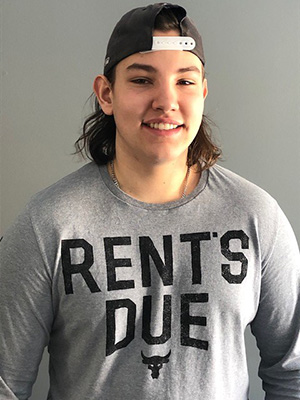 Welcome to my official page for Man & Woman of the Year! My family is standing up for the blood cancer community, to end blood cancers and to support and inspire the Toronto candidates.

I had just turned 4 when my mom noticed I had lumps on either side of my throat that were size of golf balls.  My parents were very concerned and rushed me to the emergency where the doctor had told them not to worry.  He had explained that because the lumps were bilateral, he felt there was no reason for concern.  It could just be my body’s way of fighting an infection and sent us home.  The next day, my mother received a call from my daycare saying that she needed to pick me up.  Out of nowhere, I had developed a high fever.  My parents thought it would be best to see our family doctor.  He examined me and without trying to put too much fear or concern into my parents, he advised us that he would be making an appointment to another pediatrician and in the meantime, sent us for blood work.

A couple of days later, we went to the pediatrician who asked a series of odd questions and reviewed the bloodwork with my parents.  This day, was October 1, 2009 and it was the day my life and my parent’s lives had changed.

We were rushed to Sick Kids where there was already a team of doctors waiting for us.  Being only 4 years old I really did not fully understand what was going on, but I do remember feeling scared and I remember my parents had fear in their eyes.  After a few hours in the emergency at Sick Kids, I was admitted to the hospital and I spent almost 2 weeks in my new bedroom on the 8th floor.  This was the oncology unit where it was confirmed I had Acute Lymphoblastic Leukemia  (T-Cell ALL).  By the next day I had already started my chemotherapy and what followed for the next 3 ½ years was constant finger pokes, bone marrow aspirations, various types of chemotherapies, blood transfusions, port accesses, steroids, antibiotics and the list went on.  After about 6 months, I also underwent 8 days of cranial radiation.

I was always in the hospital.  Sometimes everyday for a few hours a day and other times 3-4 days straight.  When other kids my age were learning the alphabet and learning the names of their teachers and class mates, I was learning how to say the names of chemotherapies and the names of my doctors and nurses.  Being in the hospital so often became a new way of life for us, but we always tried to make the best of it and have some fun.

It was during the first week when I was admitted we had learned about the LLS.  I participated in my first light the night from the atrium of the 8th floor at Sick Kids.  I remember looking down at the people that had gathered waiving their illuminated balloons and sharing hope and strength to all of us up above.  In 2011, I was asked by the LLS to be the Honored Hero, which was very exciting!  Me, a real- life hero, I felt I was right up there with Ironman!

For almost 12 years now, I have been a part of Light the Night and I have raised my white lantern for 11 of the 12 years.  My white lantern is not only a symbol of my survival but it is a symbol of faith, hope and strength to anyone who is going through the fight of their lives.

I am very excited and honored to be a part of the Man and Woman of the Year Fundraising Challenge.  So much thanks to all the candidates and to the LLS for their commitment and fundraising efforts to fight blood cancers.