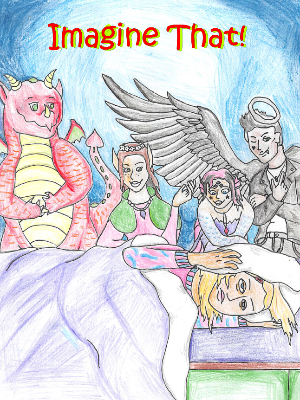 Imagine That! was a play that we started to write in October of 2020. Our local theatre group in school struggled during the pandemic to put on a show, and there needed to be a change. Maxi offered to write a musical with his friend Joe Panych and present it to the theatre group. Our play would then go through a few bumps in the road before eventually finishing its production. November, our show was written and ready for us to make come to life. In January Maxi, and Joe sought out to give back everything the theatre gave us. Maxi came up with the idea of donating to a charity. Joe, a survivor of Leukemia, suggested that we should make a campaign for the Leukemia and Lymphoma Society of Canada. We had created a small campaign run from February to March, but it wasn't very successful. In May, we were offered a campaign starter from the Leukemia and Lymphoma Society of Canada's light the night campaign. Naturally, we were thrilled! We got our entire group together and started to organize the newest campaign, which, at the time, would be called Imagine That!: Second Thoughts. Our second campaign will run from June to October, and our play will premiere once again with the re-release on July 16th, 2021. Our goal is 5,000$ Cad, half of our annual theatre grossing.

Joe is a leukemia survivor. When he was young, he moved with his family from Brazil to undergo treatment in Canada. His blood transfusion left him with a 50% chance of survival. Joe had survived his blood transfusion, and he has been cancer-free since.

"I had Infant Leukemia ALL, diagnosed at ten months old. My family and I were all the way in Brazil at the time, so we flew to Canada to get my treatment. I spent two years getting treated. Looking back, I don't remember any of it, but the stories my parents tell me are enough to make me know how bad it is. I wanted to help support the LLSC because they do good work fighting horrible diseases." - Joe 2021.

Imagine That! was structured since the start around its theme, the moral of the story. While it isn't groundbreaking or outstanding, our moral is about growing as a person. It's a story about learning to love yourself and strengthen your weaknesses without having to be someone who you aren't. Everyone who was a part of this play grew, and that was amazing to see. Our community is full of love and pride, and that's thanks to people like Joe. We want to make sure everyone like Joe gets the chance to grow as he has. That's why we chose to start this campaign.

Join the team
Donate to the team
Imagine That! is participating in Light The Night Vancouver on October 23 to fight blood cancers.

Now in 2021, COVID-19 continues to significantly impact people affected by a blood cancer.

Never has our community needed us more. Never has the challenge been greater.

Never has it been more important to take back the light that cancer and COVID -19 have tried to take away!

Registered
First Donation
Almost There!
You did it!

You’ll get recognition during the local pre-show event, plus more!

It's time to celebrate!

Your team has earned a celebration kit full of goodies for your own viewing celebration.

Your team can take over our Instagram account for a day to brag about your amazing accomplishment!

Your team has earned an invitation to an exclusive LLSC blood cancer research event, and much more!

Get your team ready to attend a virtual research lab tour, plus so much more!

Your superstar team can personalize a thank you message along with your team photo directly to healthcare professionals during one of our training sessions.